We are pleased to bring you another exciting season of programs starting with an update from Ronnie Bryant President & CEO of Charlotte Regional Partnership. 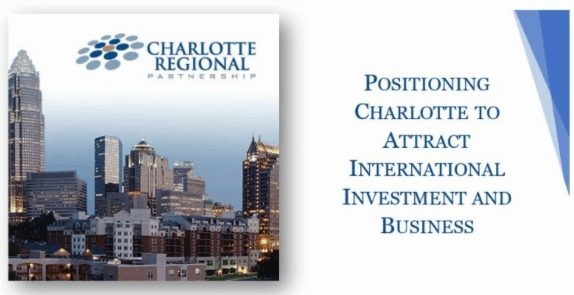 As president and CEO of the Charlotte Regional Partnership, Ronnie Bryant leads the economic development organization that promotes the 16-county Charlotte USA region as a premier location for businesses considering expansion or relocation. With more than 35 years of technical, managerial and economic development expertise, Bryant is nationally known for his proven track record of establishing and implementing successful economic development programs, with a strong emphasis on existing industry expansion and retention, regionalism and marketing.

Bryant, a certified economic developer (CEcD) since 1991, is a graduate of Louisiana State University in Shreveport and the Economic Development Institute at the University of Oklahoma (OU/EDI) in Norman. While attending OU/EDI, he received the American Economic Development Council’s Robert B. Cassell Leadership Award. He previously served as dean of OU/EDI, and is currently a member of the Executive Board and a member of the OU/EDI faculty.

Bryant is well known in economic development circles. He is a past chairman of the board for the International Economic Development Council (IEDC), which has designated him as a Fellow Member (FM) and an Honorary Life Member (HLM) for furthering the profession of economic development as a teacher and inspiration to others in many communities. His other professional affiliations include the International Asset Management Council (IAMC), the Urban Land Institute (ULI), and both the North Carolina and South Carolina Economic Development Associations. Bryant’s civic participation includes board memberships with the John S. and James L. Knight Foundation Charlotte Community Advisory Committee, the YMCA of Greater Charlotte, Charlotte Research Institute, Aspire Capital Development Corporation, The Federal Reserve Bank of Richmond’s Charlotte Industry Roundtable, the Charlotte City Club, Jazz Arts Initiative and The North Carolina Blumenthal Performing Arts Center.